First “unmanned” traffic jam and 60 minutes to a fortune: results of Up Great contest “Winter City” 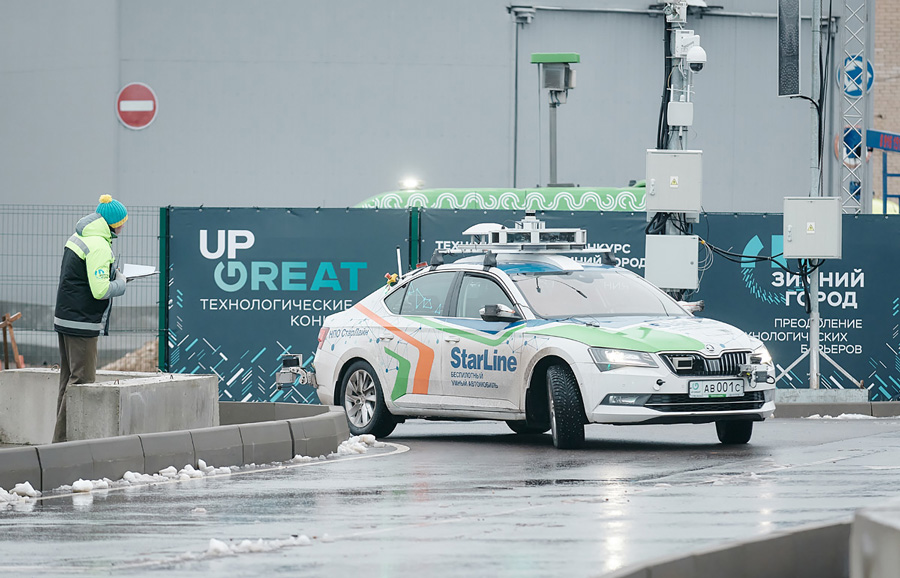 The final tests of the Up Great technology contest “Winter City” were held in the Moscow region. Team from Saint Petersburg - StarLine - showed the best result in the first mass run of self-driving cars in winter conditions. The vehicle succeeded to overcome the hardest city route of 50 km within 4 hours. The total time included penalty minutes charged for road traffic offences.

The Up Great technology contest “Winter City” is organized by RVC, Skolkovo Foundation and ASI, and aimed at breakthrough solutions in the field of unmanned transport. The task of the сontest is to create and demonstrate an unmanned vehicle capable of moving on winter city roads as an average driver.

More than 30 teams applied from all over Russia. The qualification round decided five teams to take part in the final tests: NSTU (Nizhny Novgorod), StarLine (St. Petersburg), Avto-RTK (Taganrog, Kursk), MADI (Moscow), and BaseTracK (Moscow). The real city conditions were simulated on a special testbed: pedestrians and other vehicles, traffic lights, controlled and uncontrolled intersections, a railway crossing and a tunnel.

During testing, the teams went to the starting line twice: the first ride was finished because of a traffic jam occurred on the road when one of the cars stopped on the lane. In the second ride, the StarLine team succeeded in reaching the end of the contest route. The self-driving car ran the 50 km distance for 2 hours 47 minutes. However, extra 73 penalty minutes were added to the result for road traffic offences, the most frequent of which was red lights running. According to the terms and conditions of the “Winter City” contest, the self-driving cars should complete the ride in less than 3 hours in order to overcome the technological barrier.

“The contest participants did not manage to overcome the technological barrier so far. However, they succeeded in solving a more important task - to create a professional community of engineers and developers in the field of unmanned transport. Moreover, “Winter City” contributed to the design of a unique testing infrastructure for further development of the technologies for unmanned vehicles,” said Aleksandr Povalko, General Director of RVC.

“All teams participating in the Up Great “Winter City” contest will either launch their own companies, or be purchased by the major players. Some teams have already received offers in the global market. One of them is going to start testing its technologies in Japan next year,” said Dmitry Peskov, Special Representative of the President of the Russian Federation on Digital and Technological Development.

“Self-driving car is a promising means of transportation that will make it possible to cut traffic congestion in big cities. In the long run such cars will reduce the accident rate caused by the human factor,” noted Kirill Kaem, the Senior Vice President for Innovations of Skolkovo Foundation.