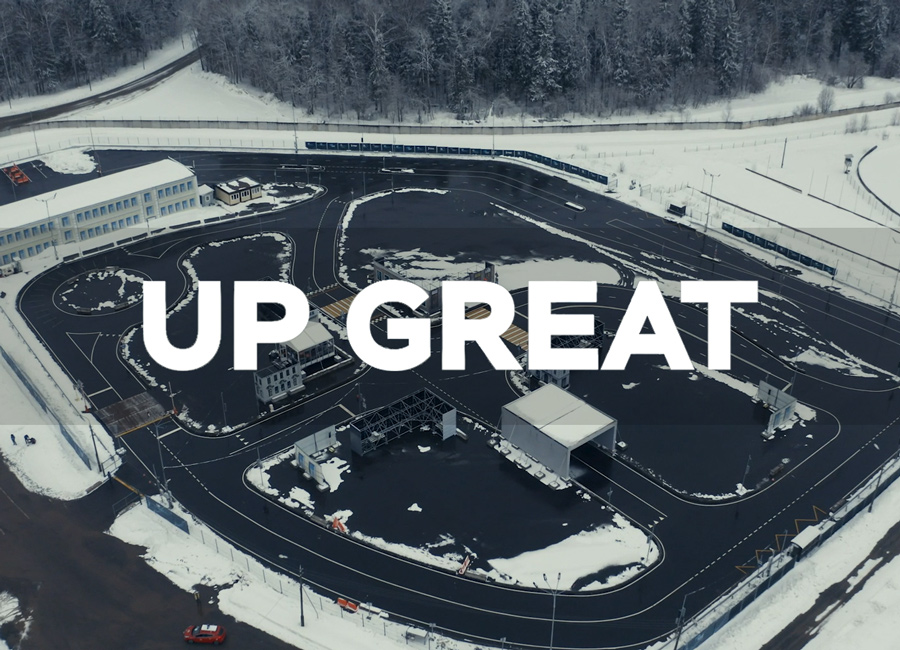 First testing of unmanned vehicles in extreme winter road conditions took place at the NAMI auto test track. The event was organized by Russian Venture Company (RVC), Skolkovo Foundation and Agency for Strategic Initiatives as part of the Up Great technology contest “Winter City”. Five teams successfully passed the qualification testing for the participation in the finals. Up Great technology contests are held as part of the National Technology Initiative and aim at overcoming global technological barriers on the promising NTI markets.

Qualification rounds of the Up Great technology contest Winter City took place at the NAMI auto testbed in the Moscow region from February 26 to March 5. 13 companies from all over Russia took part in the qualification phase: technology companies in the field of robotics and machine vision as well as developers from the leading Russian universities. Seven out of 13 teams passed the technical admission for the safe operation of their vehicles on the territory of the testbed according to the regulations.

Each team performed a series of tasks in order to test the vehicles’ abilities to react adequately to road situations in extreme weather conditions, with poor markings, low visibility of road signs, ice and snow drifts. The participants used their unique customized set of technologies for vehicle equipment: artificial vision sensors, navigation and computing systems, ultrasonic sensors, and others.

The qualification stage included tasks such as obstacle avoidance, stationary traffic, controlled and uncontrolled intersections, left turn, parking, and others. The organizers recreated the conditions of the real urban environment and the test site: there were pedestrians, car traffic and road works.

Five teams successfully completed at least four out of eight tasks and thus are allowed to the final testing of the Winter City Contest:

The final testing will take place in December 2019. The team which unmanned vehicle overcomes the technological barrier, cover 50 km on winter roads in less than three hours in accordance with the traffic rules, will win.

"Winter City" is not just a competition of vehicles, it is a competition of teams' intellectual assets, the most complex machine vision technologies, signal recognition and processing algorithms. Half of the participants successfully completed the qualification phase. We are convinced that all the Up Great contest participants are winners in their own way. To take part in the contest means to accept a tough challenge, which is not for everyone. All teams showed a high level of readiness, and they will move forward with their technical solutions. We will be happy to provide them with the necessary support, and we hope for mutual interest," said Alexander Povalko, General Director of RVC.

"When I told the experts on driverless car systems in California that we were organising a contest to develop an unmanned vehicle for a winter city, they smiled incredulously. It wasn't long before we were at the halfway point, - we completed the qualification phase of the Winter City contest. Six teams could complete the qualification tasks required to reach the final. I think this is excellent evidence of the level of unmanned vehicle technologies in Russia. "Winter City" is our first experience in holding competitions aimed to overcome global technological barriers. And this is a successful experience," said Kirill Kaem, Senior Vice President for Innovations, Skolkovo Foundation.

"Today it is critically important to gain experience in operating unmanned vehicles in real road conditions which can be challenging: urban area, snow-covered highways. We need to reach the future when several thousand cars are being tested on Russian public roads at the same time. Winter City Contest is part of such activities. State authorities and corporations should be involved in these activities. Government agencies should remove regulatory barriers, and corporations should take risks, invest, look for solutions, which would make the operation of a self-driving car more profitable than a car with a driver. If we manage now to attract the attention of the state and business, increase the investments several times, a global operation of self-driving vehicles may become a reality after 2025," said Dmitry Peskov, Special Representative of the President of the Russian Federation on Digital and Technological Development.