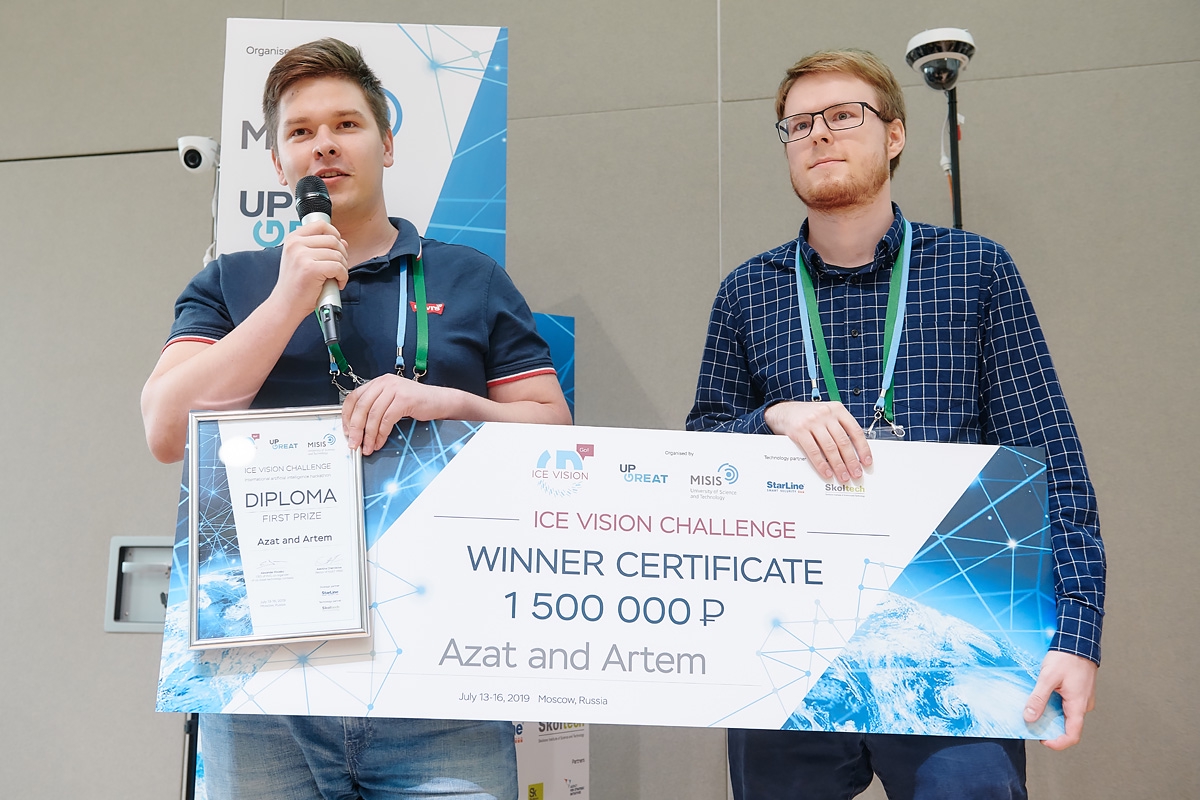 On July 16, 2019, the winners and the awardees of the international Ice Vision hackathon were determined. The hackathon was aimed at developing software solutions in the field of machine vision that will enable unmanned vehicles to effectively and accurately recognize the road conditions in the Russian winter. The winner was the team of young developers of NtechLab. The top five winners included student teams from Lomonosov Moscow State University, Higher School of Economics, Siberian State University, Skolkovo Institute of Science and Technology (Skoltech) and Novosibirsk State University. Ice Vision is organized as part of the Up Great series of technology contests for the implementation of the National Technology Initiative.

The event was held in the format of the 48-hour hackathon at the NUST MISIS Commune House campus of and the Skolkovo Institute of Science and Technology (“Skoltech”). The final of the Ice Vision competition was attended by 26 teams from six countries.

The participants of the final tested their developments in the field of road recognition on a unique “winter” dataset, which has been developed by Skoltech specialists and contains more than 600 thousand images made under difficult weather conditions, as well as lidar data, which allow you to create a real-time 3D map of the space surrounding the car.

The prize fund of 3 million rubles (about 45 000 dollars) was distributed among the following participants: Azat and Artem team, representing NtechLab, have won the first place and 1.5 million rubles (about 23 500 dollars). The top three winners also included the combined team of Lomonosov Moscow State University and PsinaDriveNow team from the Higher School of Economics, which received 300 thousand rubles (about 4500 dollars) and the Vizorlabs team, Siberian State University, awarded with a prize of 200 thousand rubles (about 3000 dollars) for the third place. The Azat and Artem and Vizorlabs teams are also residents of the Skolkovo Foundation.

"In our work, we used convolutional neural networks. We believe that this was the right decision. By the way, later, when we had already moved away from computers, we discussed our decision with the team that took the second place, and it turned out that they acted according to the same principle. They even showed us some lifehacks that could further improve our final result," said the captain of the Azat and Artem team.

"The development of unmanned vehicles is one of the most topical challenges for the developers of artificial intelligence systems around the world. Conducting hackathons aimed at finding effective solutions in the field of improving computer vision for autonomous vehicles, allows you to get closer to creating unmanned systems of the 5th level. I am sure that the developments proposed by the young engineers participating in Ice Vision will find a practical application and will be in demand by our business partners,"commented Alevtina Chernikova, Rector of NUST MISIS.

"In the Ice Vision final, the best young programmers from all over Russia competed with the teams of the leading foreign universities, and during this battle, they confirmed that our engineering school is at the level of advanced world standards, and exceeds them in a number of areas. The competition is a part of a large project on the development of unmanned driving technology. Daunting challenges were set for the participants, and the solution of them will open up new markets and shape the global technology development agenda. I am sure that the result of the competition will be not only the monetary prizes but also the application of the developments created in the field of unmanned vehicles,"said RVC General Director Alexander Povalko.

“The hackathon participants have shown their potential, their ability to contribute to the real sector of the economy - to the automotive industry. I was surprised by the participation of foreign guys who also understand the need to teach unmanned vehicles to see in difficult winter conditions. We saw different approaches of the teams: some participants applied interesting solutions for combining classical computer vision algorithms with neural networks. During the hackathon, the guys managed to get acquainted with the developers of unmanned vehicles, we hope that by joint efforts we will be able to create progressive technologies of unmanned driving that will make the future around the world safe and comfortable,”said StarLine President, Temur Aminjanov.

"It used to be thought that creating an artificial eye capable of distinguishing objects from the outside world was a question for the summer work of a pair of students. It took more than fifty years for the computer vision system creation to truly become a summer job for several dozen students. However, now we seem to have reached the level of development of artificial intelligence, which will very soon allow us to create image recognition systems that work no worse than humans. Such hackathons as the Ice Vision allow us to identify the best talents who are not afraid of ambitious goals that we at Sberbank meet to implement the national strategy for the development of artificial intelligence,” said Albert Efimov, head of Sberbank robotics laboratory, which is a partner of the special prize of the Ice Vision hackathon.

One of the leading technological Russian universities NUST MISIS was the co-organizer of the competition, Skoltech was a technology partner and the StarLine research and production association was a strategic partner. During the final competition, representatives of StarLine conducted a special workshop where they told participants about their experience in building an unmanned vehicle, how to build high-precision maps, localizing the car in space, planning routes and architecture of hardware and software solutions, and also demonstrated their drone.