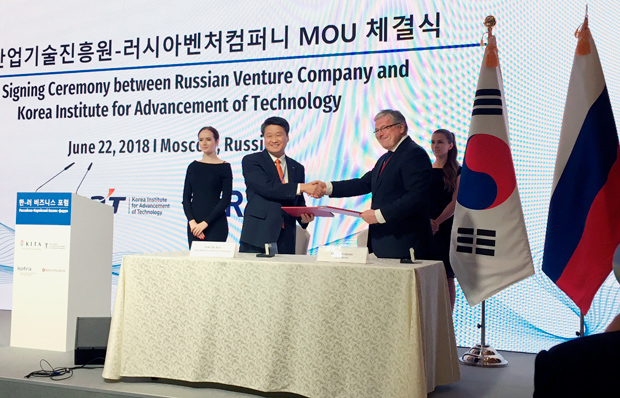 RVC and the Korea Institute for Advancement of Technology (KIAT) have signed a Memorandum of Understanding for cooperation in development and advancement of technology innovation. The agreement was signed on the margins of Russia Korea Business Forum in Moscow.

The key area of cooperation will be South Korea’s active involvement in organization of the National Technology Initiative’s (NTI) Winter City and First Element Technology Contests, which are getting launched this year by RVC, the Skolkovo Foundation, and the Agency for Strategic Initiatives (ASI).

Under the new agreement, RVC and KIAT will encourage Korean engineers, scientists and entrepreneurs to participate in contest assignments to overcome international technology barriers. South Korean teams will have an opportunity to compete in creating a driverless car designed for safe navigation in a difficult weather conditions, as well as developing a highly efficient hydrogen fuel cell for vehicles and aircrafts.

Alexander Povalko,
CEO of RVC
“South Korea has made a commitment, through KIAT, to become the first international partner of NTI Technology Contests. This indicates that the challenges of overcoming technology barriers included in contest assignments are relevant not only to Russia, but also globally,”
Alexander Povalko
CEO of RVC
Kim Hak-Do
President of KIAT
“Russia is extremely competitive in basic sciences such as physics and mathematics, and is in possession of original technology in advanced materials, biotech, and aviation. We hope to expand cooperation in the long term because both countries can jointly create new industries through mutual complementary cooperation utilizing Korea's enterprise innovation capability and high-tech industry technology,”
Kim Hak-Do
President of KIAT

National Technology Initiative’s contests is a format of an open engineering contests, which is new for Russia, and is designed in order to find breaking solutions for the most difficult technological problems of global scale. The winner of the contests receives a significant money prize for delivering an understandable and scalable solution of the contests task to the expert jury and wide public.

The contests are initiated by RVC, the Skolkovo Foundation, and the Agency for Strategic Initiatives (ASI) in the framework of the National Technology Initiative. Its goal is to overcome significant technological barriers that stand in the way of the emergence of new products at the future NTI markets. The mechanics of the contests is developed in accordance with the best international technology contests practices: XPRIZE, DARPA Grand Challenge, etc. The functions of the NTI Technology contests are carried out by RVC. The acceptance of applications for the first contest is scheduled for this summer.